There is rising speculation in the media that recession is on the horizon. While we cannot say for certain what is coming, we can observe that media tend to amplify, if not exaggerate, the significance of newly released data. Fortunately for our readers our parent organization, AIER, has for decades published a consistent and dispassionate assessment of the current state of the economy based on the most recent statistical indicators.

AIER’s Business Conditions Monthly provides and empirical assessment regarding the likelihood of a turning point in the business cycle in the near future. Its indicators can be of value to both households and businesses. For example, workers in cyclical industries such as mining or construction can engage in “consumption smoothing” over the business cycle. Similarly, small businesses might pare their inventory if a slowdown is on the horizon.

AIER’s currently counsels that “despite having the Leading Indicators index below 50 for a second consecutive month, the outlook remains moderately positive, though with a heightened degree of caution.” In other words, there is no cause for alarm.

Among those leading indicators is the interest rate spread between one-year and ten-year U.S. Treasury obligations. The chart below plots the spread since 1960. These data currently reveal an “inverted yield curve” in which short term rates exceed longer term rates. For AIER’s take on this development and what it might portend, please read “Fear Not the invested Yield Curve – Yet” from AIER in this issue. 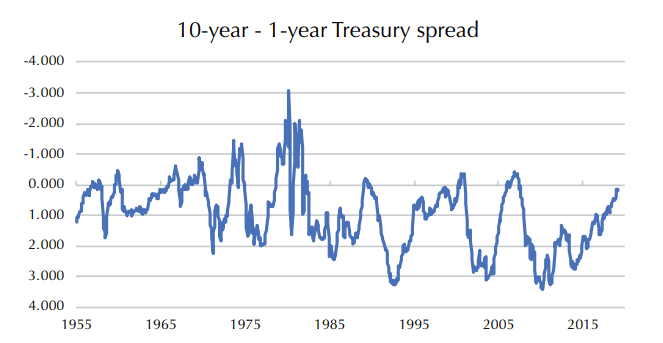 Also in This Issue:

AIS is a wholly-owned subsidiary of:

*Registration with the U.S. Securities and Exchange Commission does not imply a certain level of skill or training.

The information provided does not constitute investment or tax advice and it should not be relied on as such. It does not take into account any investor’s particular investment objectives, strategies, tax status or investment horizon. You should consult your tax and financial advisor. It should not be considered a solicitation to buy or an offer to sell a security. All material has been obtained from sources believed to be reliable. There is no representation or warranty as to the accuracy of the information and AIS shall have no liability for decisions based on such information.

Any mention of commercial products or reference to commercial organizations is for information only; it does not imply recommendation or endorsement by AIS nor does it imply that the products mentioned are necessarily the best available for the purpose.